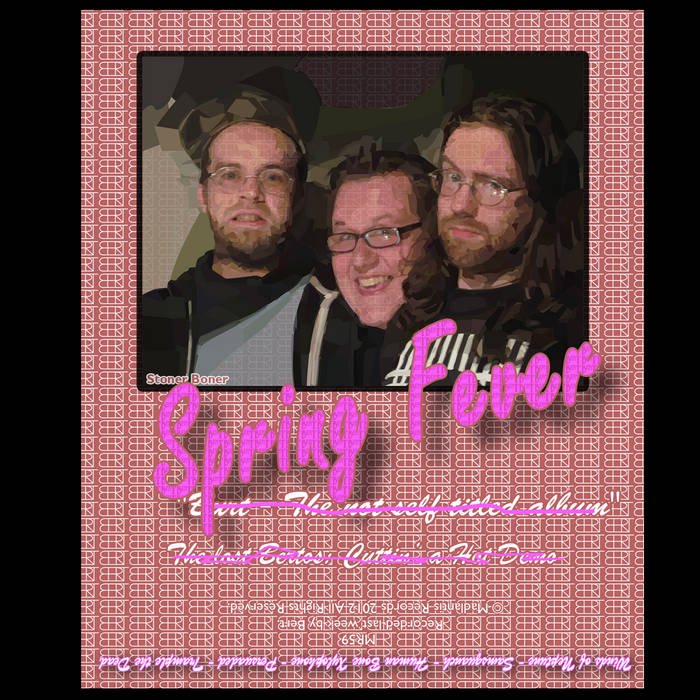 Cd for sale at www.madlantisrecords.com $3 + S&H

BerT. Stoner Boner. 1. Winds of Neptune - Alt. Version (original version featured on the upcoming album "Return to the Electric Church") 2. Samsquanch - Alt. Version (original version featured on the upcoming album "Wall of Bees") 3. Human Bone Xylophone - Alt. Version ( original version featured on the upcoming album "Return to the Electric Church") 4. Persuaded - Written by Kevin Laitala (Originally performed and recorded by Tahquamenon Falls) 5. Trample the Dead - Including - a. Bunnywurm b. Mars on Fire c. Heart Shaped Mc Bubba D. Big Yon - Demo Version recorded in 2010, 3 couch method, with the biggest drums and stack of amps we could possibly muster. ( Studio versions featured on upcoming album "Shithawk" ) We needed an album, and fast, so we walked into WXL studios and said "HEY!" ... not sure who we were yelling at, but we did. First off that is not what happened. What actually happened was we were walkin round town, something flapping nothing happened? Indeed nothing happened and everything happened all at once. Therefore the album was done the minute we walked in the guy behind the counter handed it to us. "Damn it, I have 5 kids to feed!" He said as he flapped the master tape into my hand. "Well that's kinda irrelevant" replied I, plus we did too walk in there and say "HEY!" so you just shud. Let me sidebar this for a second. I would like to say I really like the sound ambience and dynamic range we captured. with the "patent pending", Phillip Clark, 3 couch method mic setup. And to touch on a prior point here Ry you should!! With the album sounds completed, we walked around town all stoney and thought, "WOAH THERE!" cause like, there was no art goin on around in there. We walked back into the studio. And then we walked back out, Rael! Don't be trying to tell us where we went! Also look Phil I got a homemade fuck off for you right here! Also what in the shit tits is that weird sound flapping? Offruv the side bar and back to the original bar, we did this whole bad boy in 15 hrs, that's like a Bert world record guys. Enough about us why don't we talk about something that really matters!! I mean for fucks sake boyz!! keep it on task... Like how Ryan, Phil and Rael listened to some Tahquamenon Falls albums, and they were all moved and cried like little you wouldn't believes. Ryan was crying, he denied it and then started to cry. Phil coughed and fell out of his chair while screaming bones at the wrong time. Rael was totally awesome. Rael was not! Because he can't spell and no one can tell what yr talking about. The structural capabilities of the upstairs at WXL studios allowed us to create a rich pallet of sound, therefore enabling us to capture a very flavorful texture, giving us the space for interplay between the instruments. Just throwing that out there, PHIL!! Blah Blah Fucking words turdZ!! What about that spider war of 2008 reclaiming the wounded on the walls of the batcave!! Ryan killed a spider and its homey came and took its body and gave Ry the evil eye and then the squirrel showed up. He kept waking me up and walking through walls and shit, it's cool though. Then some stuff happened. Then we did some shit. Ok so obviously this has run out of steam, so it's over. Thanks to the people who made this all happen. So I guess I mainly mean, thanks to us. For without us, we wouldn't be here. We would like to thank the Andrews Bastards, Chief, Travis @ HPRX, The Jack Pine Snag, Jon & Alex from Hordes, Kevin for the tunes and the laughs. PMD, Pat Wenzel, Colin Such, Todd Karinen, Cavalcade, American Gothic, Cheigh for helping carry stuff, Simmer for taking the picture, and we double thank the people we forgot because were idiots... I would like to thank Ryan and Phil for finally SHUDING. I would like to thank Rael Of the OPERA, up there... I would also like to say frig off to all those hamhammers out in Squirrel Rock City..... pop. 12 squirrels. Thanks to everyone that's been a dick to us, and to all the people that are currently being dicks. I would also like to thank all of the future dick headed people, for being DICKS. I am writing this so I have the last word. THE END p.s. Rael you shud. p.p.s. for the record we are not called Berrrrrrr Tee, hasn't anyone seen a metal logo before, dicks....

Bandcamp Daily  your guide to the world of Bandcamp